Previous postSave The Salt Responds to Hemmings Daily Report
Visit Save The Salt at the 2018 SEMA Show!Next post

932 people stopped to add their names to a petition asking the Bureau of Land Management to restore the Bonneville Salt Flats back to safe racing conditions for amateur motorsports.

What began under a baseball stadium in the off-season now commands every inch of exhibit space at the Las Vegas Convention Center and several nearby hotels. The SEMA Show aisles offer anything and everything you might ever wish to put upon, in, or improve your street machine.

The 2018 crowd sent attendees number past 150,000 in four days. Land speed racers staffing the Save the Salt booth figure they saw at least 100,000 walk by the first 300MPH roadster driven by Dave Davidson and John Levie was on hand to explain his 320MPH sidecar streamliner.

Public Information Officer "LandSpeed" Louise Ann Noeth asked and was given without hesitation, direct help from Roger Penske and the NHRA. All week the passing masses were asked to take a moment and "co-sign" the letters to help save the Bonneville Salt Flats. By Friday afternoon, Noeth had run out of paper and 936 had signed. Proving once again that Bonneville is revered worldwide 58 signatures were inked by enthusiasts from 12 different countries!

All signers agreed with Penske who led the charge with a powerful letter sent to Acting BLM Director Brian Steed station stating that he was "keenly aware of the importance of Bonneville" as well as "its international significance to the history of of motorsports," followed by an equally strong and poignant piece of correspondence from NHRA President Glen Cromwell who noted, "We simply cannot understate the historical and sociological importance of the Bonneville Salt Flats." 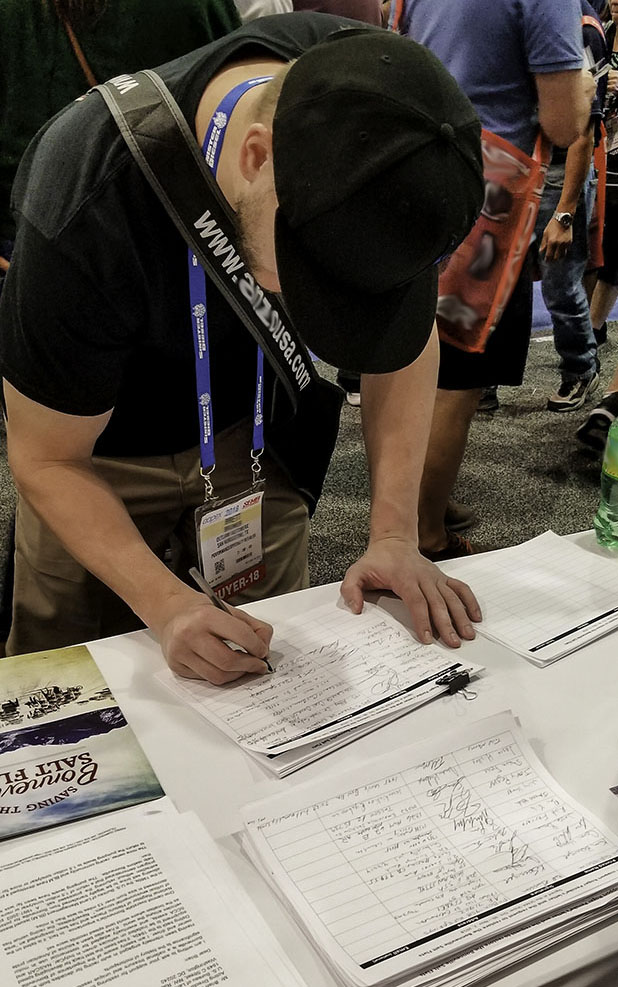 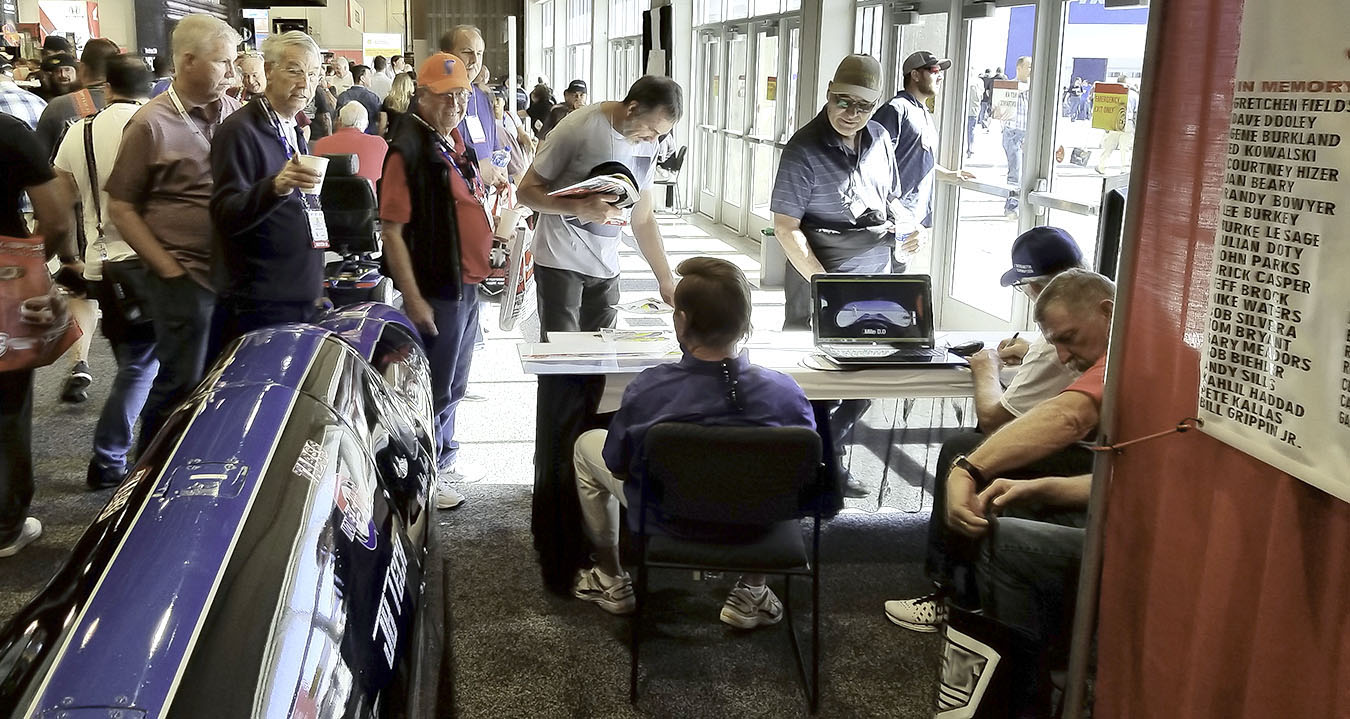 Fundraising began with contributions from the land speed racers themselves and then, together with  SEMA Show attendees, Save the Salt was able to put $2,257.00 ($1,457.00 Donations) + ($800.00 Silent Auction) into the salt chest to restore depth and length to the international speedway.

Danny Thompson's sponsor Ball Watch Company offered up a stunning GMT Roadmaster for silent auction. The watch, #0003 in the series, is the only one to bear the inscription, "Save The Salt" - making it a one-of-a kind timepiece. There winner had attended Speed Week for the very first time this year and witnessed Danny and Challenger II roar into the history books so he was particularly stoked to the have been the high bidder!

Artist Hal Tacker donated framed, colored drawings of the 911 Roadster and The BWS Streamliner that got snapped up by fans of each racing team utterly stunned to see their heroes at the show. 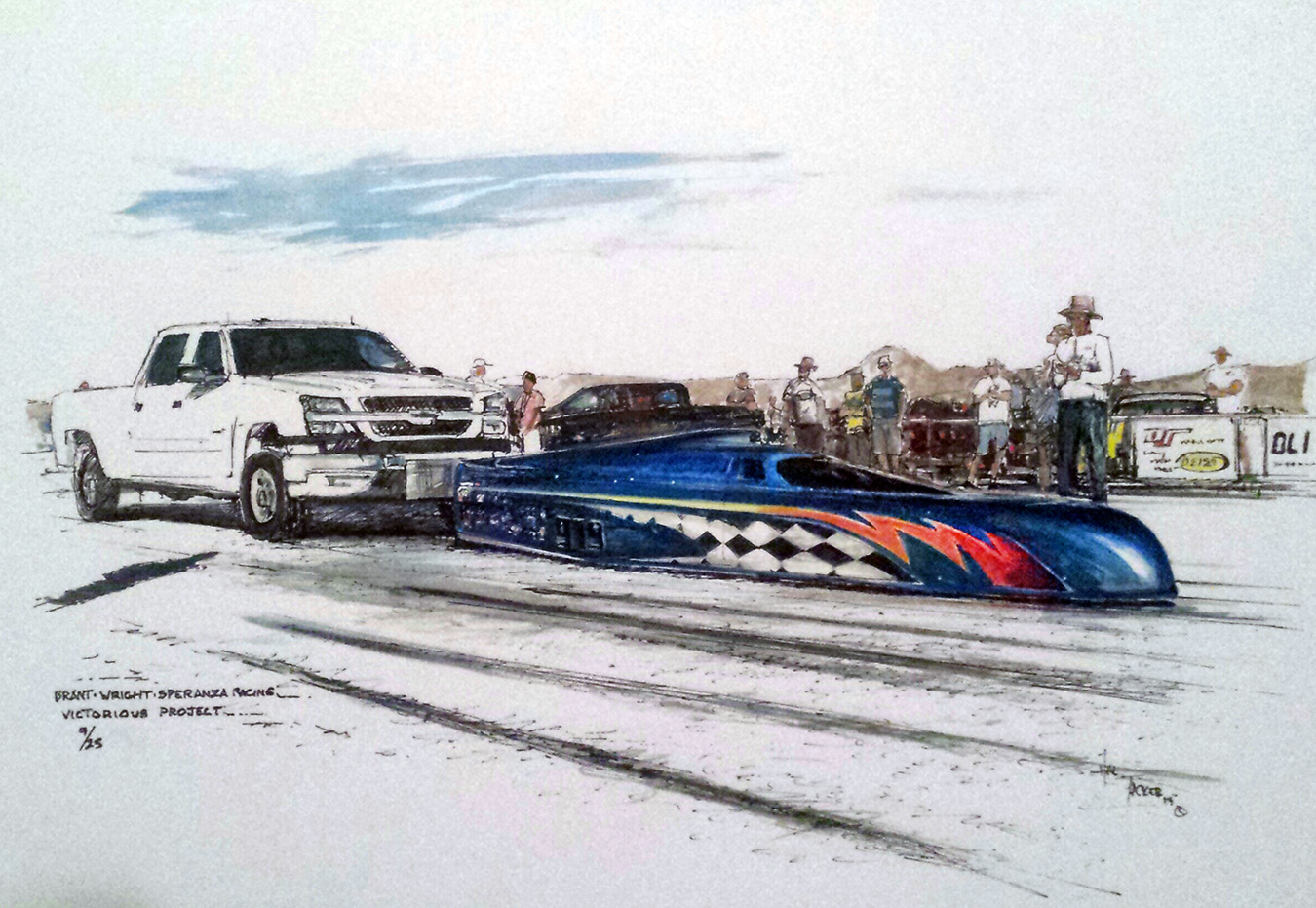 Chick and Tony Huntimer sent an entire case of their fabulous 9 x 12 black and white calendars that are revered by everyone on the salt for authenticity, dramatic framing and honest representation of amateur land speed racing. 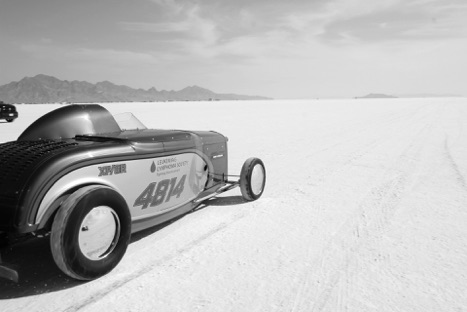 Author John Baechtel sent along 5 shiny copies of his new book "Goldenrod - The Resurrection of America's Speed King" the most comprehensive, fact-checked tome generously supported with period and restoration photographs telling the complete story of the legendary 400MPH hot rod from the early 1960's. 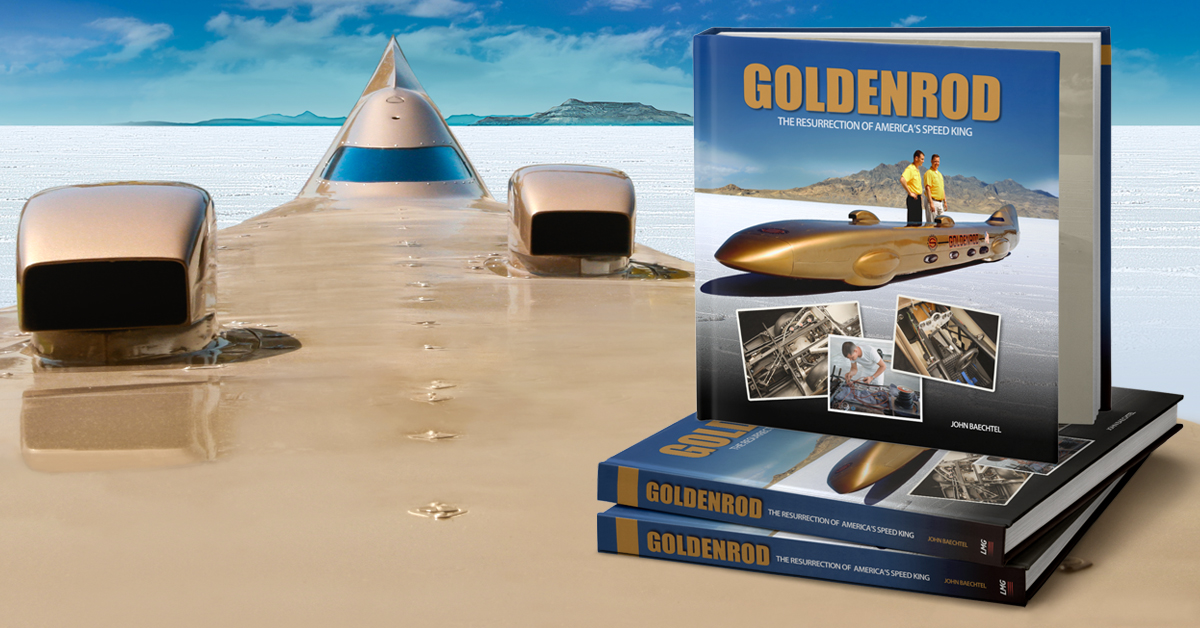 Sarah Kasprowitz sent a copy of "The Reluctant Rocketman" her insider's story of the Blue Flame from the rocket designer's perspective - her father! Fascinated since boyhood, Ray Dausman was the first to figure out how to make rocket power throttleable. 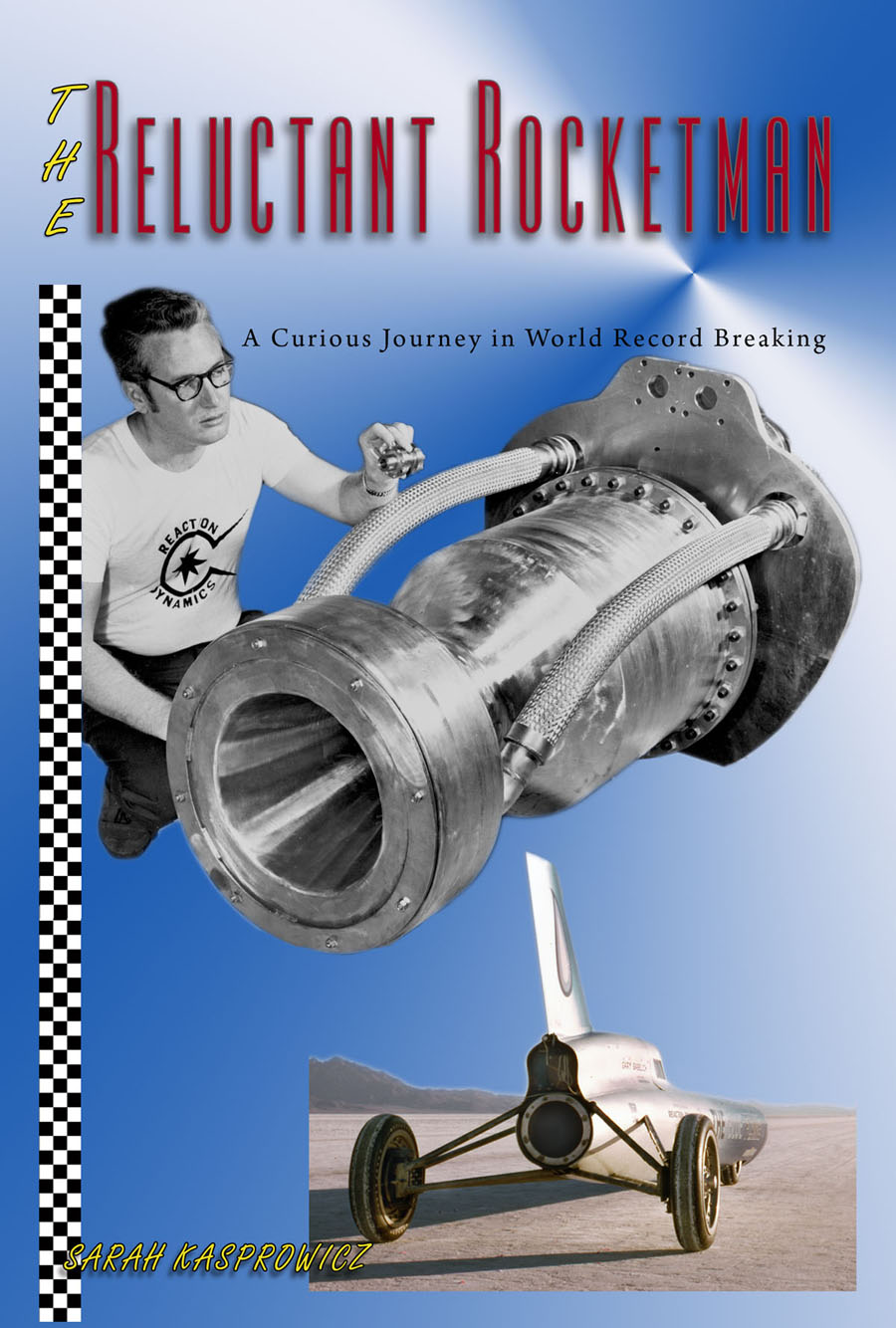 LandSpeed Productions donated the "Boys of Bonneville" DVD that tells the story of the unmatchable Ab and Marvin Jenkins. The last 5 copies of "The Demon's Dozen" - a special edition from George Poteet's incredible 2012 season where he drove the Speed Demon streamliner in excess of 400MPH a dozen times to snag 2 international and 2 national records. 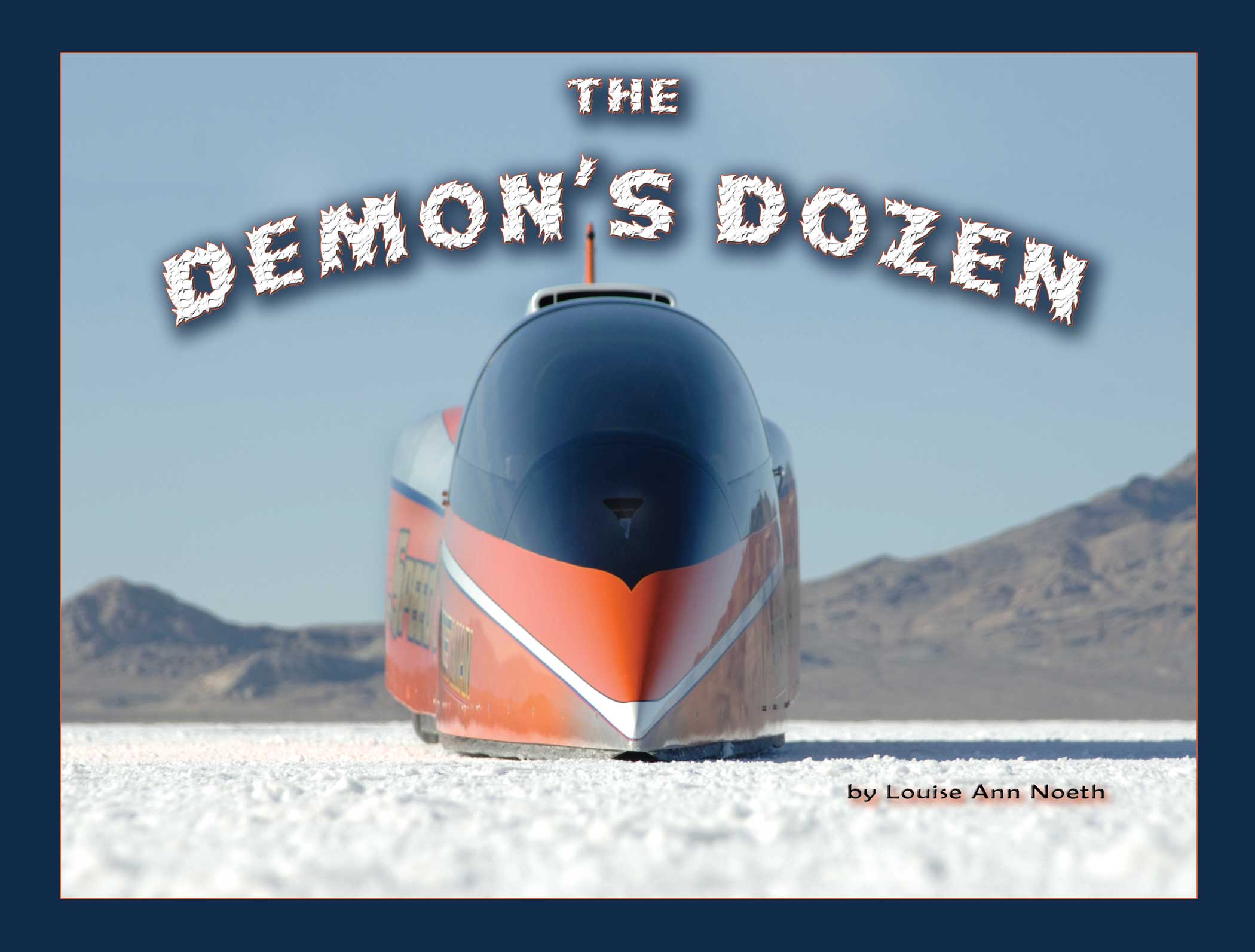