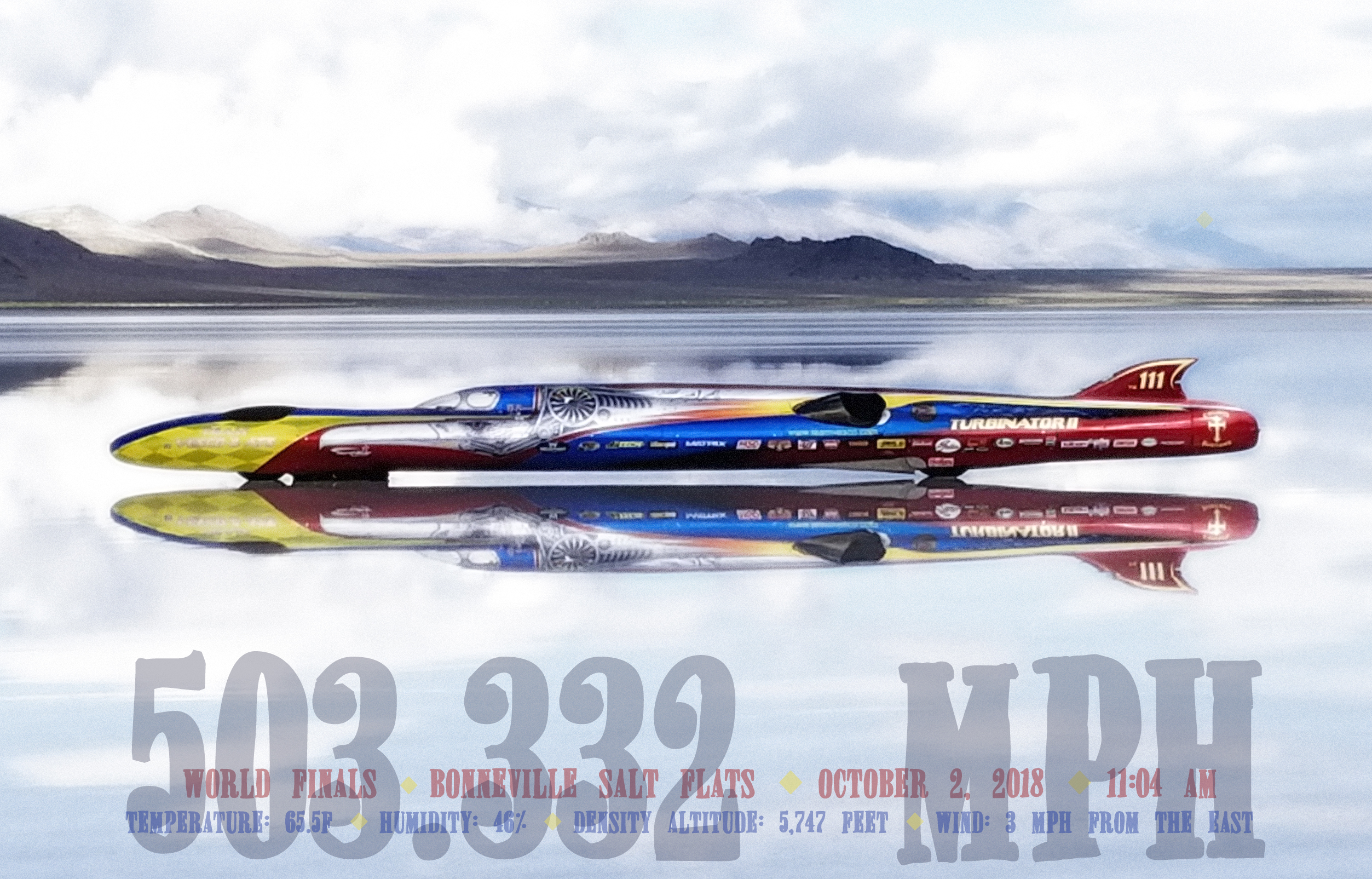 Of the 112 runs made, 25 qualified for new national class records on the first, and as it turned out, the only day of racing.

Others are still astounded at the Triumph TR6 exiting the 5th mile timing lights at 388MPH.

“Mother Nature might have put us to bed for the season, but our volunteer organization is very glad to part of history," observed McDowell.

On Tuesday, October 2, 2018 at 11:04AM the Team Vesco Turbinator II driven by 76-year old Dave Spangler roared into history tripping the exit speed clocks at 503MPH while holding 493 throughout the measured mile. In other words, the car was still accelerating when it ran out of timing eyes.

“I finally hit the sweet spot,” explained driver Spangler who lost one of two parachutes at 478MPH. “Stability is not a problem, the car was planted in the fifth mile, I was stopped by 7.5 mile marker. There is certainly more left in this car.”

A land speed record – National or World – requires 2 runs with the record speed the average of both. The only difference is that a world record must be completed in one-hour over, back and forth over the same measured mile. National records are an earned average going the same direction over a 2-day period.

“I know how long they have been working towards this achievement and I could not be happier for them. I look forward eagerly to the day when Turbinator II will also run for an FIA World Land Speed Record and add a new entry to the record book, alongside the already legendary entry of its predecessor, Turbinator.”

National events simply have to too many vehicles to swap directions in less than 60 minutes, so any racer that qualifies on a current record by exceeding the current number, is invited to “impound.”

The next morning all the impounded are the first to the starting line for the second “record run” and a chance for record book glory.

No one went home with a record.

Winds built to chaotic levels and the jousting commenced between the 50mph ice coolers and 30mph orange course marker cones when the rain joined the 65 mph winds and laid down a half-inch of water across all 30,000 acres in record time.

Although the pits were dry by noon the following day, when the rain returned the next evening all 25 impounded cars and motorcycles knew their record hopes were dashed.

“The course was best we had seen in more than a decade,” observed Turbinator co-driver and Crew Chief Eric Ritter, of Queens, New York who drove in 2017 to build consistency beyond 400MPH.

“The thin surface was rock hard, without soft, or loose spots that allowed us to lay in more power. We’ve come a long way in short period of time and I now believe 600MPH is plausible.”

TEAM Vesco was the Top Record Setter at every organized time trial on the salt flats throughout the 2018 season. In September, at the Utah Salt Flats Racing Association (USFRA) World of Speed, the team inked a 482MPH National Class record that topped the team's current 458MPH World Record.

In August, at the venerable SCTA Speed Week, the team earned the HOT ROD Magazine Top Time Trophy with a 463.038mph in class T3. 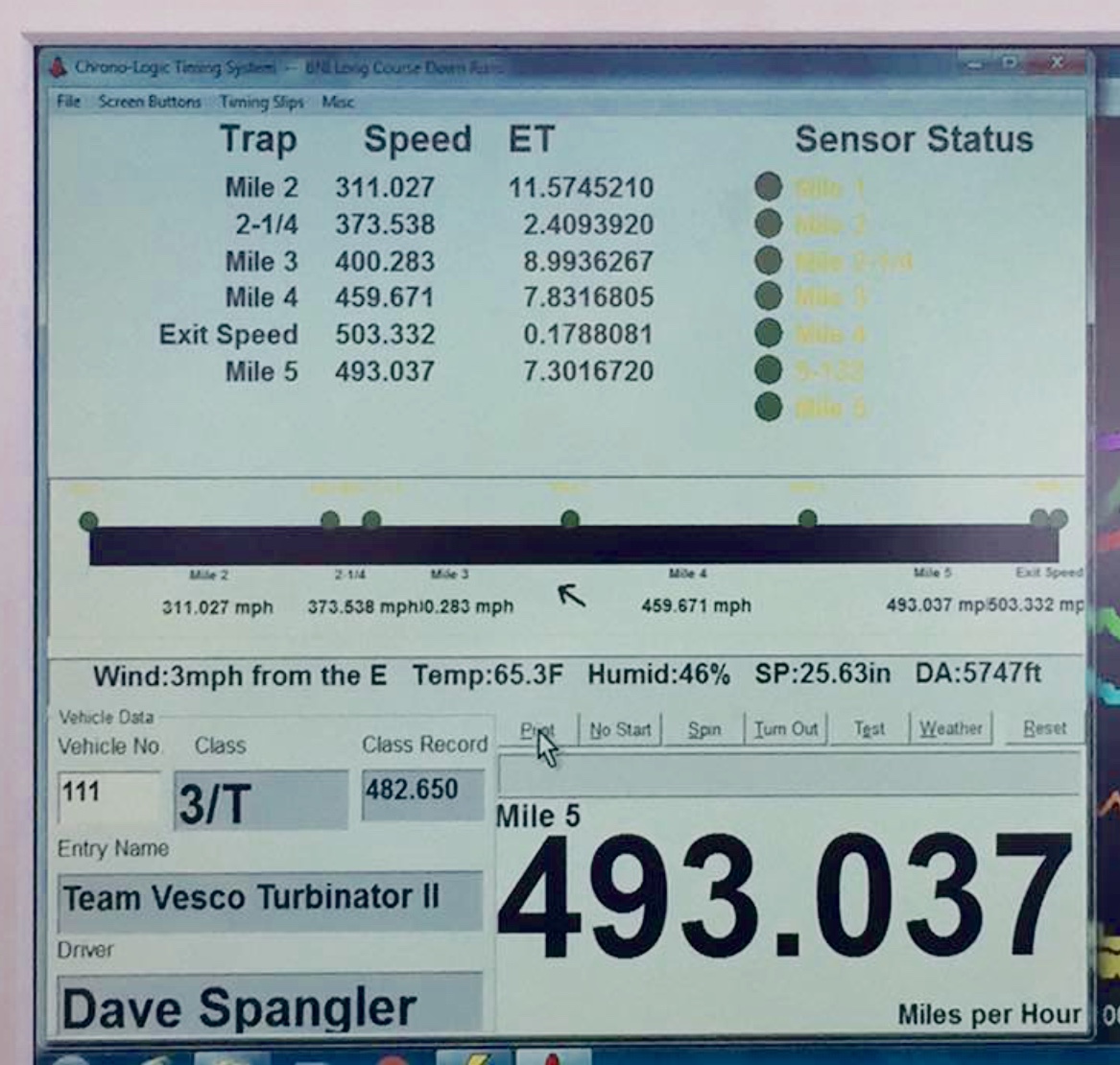 Another big checkmark came from Ed Umland, of Orangevale, CA, who scavenged the tall deck 439CID LSX twin-turbo engine with GM Performance block and heads out of his ’37 Ford Coupe daily driver, added a 5-speed Lenco and single-handedly, in 18 months, built the “Eddie’s Chop Shop” 29-foot streamliner that cranked out 403MPH on pump gas.

“I expected to be heartbroken, but I’m hardly disappointed,” chuckled Umland with gusto. “We’re just getting started, there’s a lot more potential and the World Finals was a stepping stone to 2019.”

Costella -Yacoucci – Waters streamliner entry was one of three aero-savvy body designs by Jack Costella that needs much less power to go fast.

“We had zero wheel spin this year and then a cylinder shut off as I passed the last clock,” said Driver Rick Yacoucci of his 398MPH average that produced a 409 exit speed using 25-year old cylinder heads atop a 255CID small block.

John Levie, of Elko, Nevada, rode his sidecar streamliner 212MPH that gave him “fastest bike” honors for the eighth time in a row. The 1650cc 3-wheeler has yet to make a full pass, but has previously run 314MPH.

“We were all looking at making historic passes,” lamented Levie. “I was stunned when the 911 roadster thundered by like a freight train on nitro and then suddenly. . . , BANG!, it coughs a blower off the top of the motor.”

“We clocked a 431MPH average with our new LS engine but with one hole dead,” said Crew Chief Steve Watt and Car builder, of Ventura, CA. “We ran 31 miles per hour at the start of the run than we ever had, and had we not broke we were looking at a possible 490MPH run.”

Amateurs all, organized land speed racing on the Bonneville Salt Flats began in 1949 with a small army of volunteers. Today it is bigger army, but mission remains the same: give ordinary people a chance to do extraordinary things.